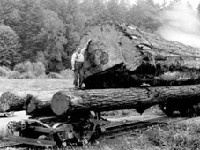 Located 90 miles from the Pacific Ocean at the confluence of the Cowlitz and Columbia Rivers, Longview is a relatively new city with a short but remarkable history. Less than 75 years ago, the area where Longview now stands was sparsely populated wilderness and rural homesteads.

Longview is a city with a unique history. At the time of its conception, Longview was the only planned city of its magnitude to have ever been conceived of and built entirely with private funds. But don't be carried away by romantic visions of Pierre L'Enfant capital city, or the benevolent experiments of utopian social scientists. Longview was the direct result of industrial expansionism.

What makes Longview different from the majority of cities that have sprung up throughout history is that it was completely planned down to the last sidewalk and the last street name before construction ever began. Originally, this planning allowed the city to grow inwards along organized lines with separate areas designated for business, industrial and residential areas.

To learn more about our history, we recommend taking a walking tour of Longview:

In 1849, pioneers led by Harry and Rebecca Jane Huntington began to arrive in this area to settle along the Cowlitz River and file homestead papers. Huntington named the settlement, located about two miles to the south of the Longview Civic Center, "Monticello" in honor of Thomas Jefferson's home in Virginia.

In 1852, people from all over what was to become Washington state gathered in Monticello to draft a memorial to Congress. The memorial expressed their desire to be granted statehood under the name of Columbia. This meeting came to be known as the Monticello Convention. The desires of the Convention were met favorably in Congress, but it was decided that a state named Columbia might be confused with the preexisting District of Columbia.

The state was instead named Washington in honor of our first president. Today, a monument to the Monticello Convention stands not far from the Longview Civic Center.

The city's origins can be traced back to decisions made in a Kansas City, Missouri, boardroom in 1918. Present at that meeting were Robert Alexander Long, president of Long-Bell Lumber Company, and Mr. S. M. Morris, among others.

By 1918 the southern timber holdings of Long-Bell lumber were nearly depleted. In the days before tree farming, logging operations clear-cut all the timber in a given area and then moved on. The board of directors had to decide whether to liquidate the company's sizeable logging operation and concentrate on their line of hardware stores and commercial lumber yards or to look elsewhere for another source of timber.

No one present that day could have imagined that just six years into the future Long-Bell would be responsible for the incorporation of a fully modern city.

The decision was made to stay in the timber business. Originally, Long-Bell planned to build only one mill at the site which was to become Longview, and had no intention of ever building a city. In those days, it was common to build a mill and then let a mill town spring up pell-mell around it. Living conditions for loggers and mill workers alike were usually abysmal and little thought was given to their comfort or to that of their dependents.

As Long-Bell planned to build first one, then two mills at the sight, it became apparent that upwards of 14,000 workers would be needed at the site. The nearest center of population, Kelso, had less than 2,000 residents, and it was obvious to even the casual observer that a fraction of the new workers would inundate the existing town's infrastructure.

In May, 1921, Wesley Vandercook, Long-Bell's Chief Engineer set up headquarters in Kelso, and with a hundred men began to survey the new purchase. The result was a highly detailed contour map that filled an entire room. This map could be used by the loggers to plan their cuttings, the location of railroad grades, and even the spar trees to be used in hauling timber up inclines before any operations were begun.

As Mr. Vandercook began to appraise the local situation, it became clear that major accommodations would have to be made for the mill site and for the workers who would man it.

First, the majority of the flat land, purchased by Long-Bell across the Cowlitz River and about four miles from Kelso, had a high water table and would require the surrounding protection of a large dike in order to be suitable land for building. In addition, Mr. Vandercook realized that Long-Bell had not purchased enough of the flat valley land to contain their operations.

After conferring with Mr. Long, principal stockholder and general manager of Long-Bell, an additional 47 options to buy were contracted on the lowlands stretching between the Cowlitz and Columbia Rivers. All of these options to buy were exercised by Long-Bell in the next five months, giving the company a majority of the valley's flat land.

Longview is the modern city that it is today due in a large part to the personal determination of Robert A. Long. George B. Kessler of St. Louis, and Hare and Hare of Kansas City, nationally known city planners, were contracted to complete the plans for Longview. Monticello Hotel, R. A. Long High School, the Young Men's Christian Association (YMCA) building, and the Longview Public Library were donated by Mr. Long personally. The city planners originally imagined a fully developed Longview to be a city with 75,000 residents.

Longview was dedicated in July 1923. In February of 1924, it was incorporated and a municipal government was established. Its history began in the roaring 1920s, and today Longview continues to grow in size and diversity. It is a fresh, new, healthy town with a promising future and an already rich past.